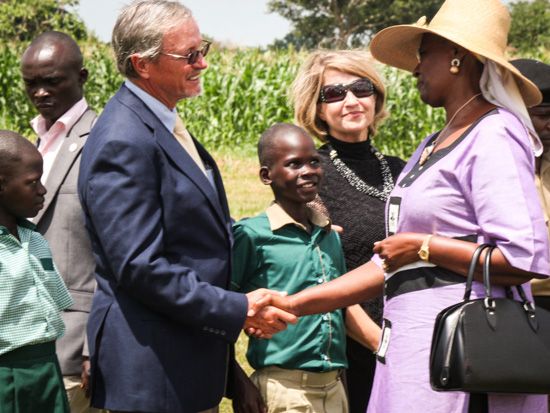 Janet Museveni, wife of Uganda President Yoweri Museveni, visited Restoration Gateway last week. The First Lady called RG “a miracle” and we agree. Director Tim McCall says, "The RG children just amazed everyone with their performances. Our interns (CJ and Jessica) did a fantastic job getting them ready. The two teams that were here (Dollar for the Poor and Waypoint Church) also were a great help not to mention our work force giving an extra effort. The grounds looked tremendous. We stand amazed at God’s favor and wonderful goodness to RG and us."

To give you a taste of the event, here is an excerpt of a blog by Ryan, an American visiting RG at the time of the First Lady's visit:

"Woke up to a bit of a ruckus this morning. A lot of loud trucks and soldiers with big guns everywhere. The First Lady of Uganda came today and I guess she brought some friends with her. They had us all line up and walk through an airport type metal detector that they brought with them and powered it from a generator. They had to take all our cameras and check them to make sure they were safe. It was all pretty crazy. She flew in on helicopter which is something many Ugandans have never seen so I had a lot more fun watching the pure joy in the kids faces watching the helicopter rather than watching it myself. The program that Restoration Gateway put on was great! The kids worked so hard on their songs, dances, and poems and it all turned out wonderfully and I think the First Lady loved it. I also had the chance to shake her hand and greet her so that was pretty neat. Probably won't have a chance to ever to that again haha"

Ryan went on to give an encouraging account of the discipleship of our RG children:

"Tonight at dinner one of the younger kids talked about doing good things and going to heaven ... but one of the older girls immediately responded telling them no and told them it's about faith in Jesus. It was so great! She was about 12 years old and she understood justification through faith and not works! So, so encouraging because it's easy to get stuck in a legalistic mindset but this girl has been taught and understands so pour into young kids, they get it!"

We are so thankful for the favor of God that rests on this ministry!

*Read the article the State House of Uganda posted on this visit.